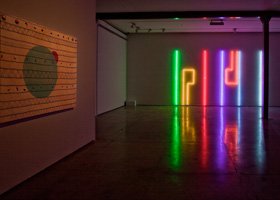 After partition Nehru invited Le Corbusier to design the Chandigarh Parliament.
While one can look at this as the intervention of European Modernism in India, if one looks at the bigger picture there is an obvious thread of mystic geometry originating in the Indian Subcontinent that could be said to pervade and inform European Modernism.

Thus, hermetic forms such as the spiral and atomic structures, developed in tantra, can be said to play a major part in the evolution and thinking of the early Modernists, influenced as they were by theosophy and Rosiecrucianism.
These systems of thought in turn were heavily influenced by early Indian philosophy and played their part in the independence movement in India.

It is this full circle of ideas and forms that this exhibition looks to explore.

Using a combination of pieces on vintage textile and neon wall sculptures, the works in the show map out a trajectory between formal abstraction, architecture and sacred geometry.

Through looking at a circulation of forms between Le Corbusier's designs for Chandigarh, tantric symbols- and the utopian narratives that could be said to both contain and be contained by them- what the show points to are alternative currents towards a mystical mapping of the city of the future.

Posted by Fabrizio Gallanti at 17:33