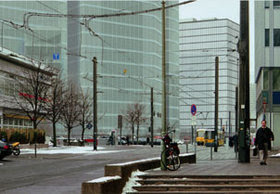 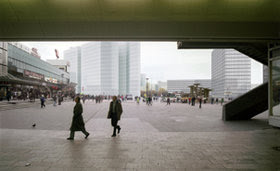 "Berlin Alexanderplatz Szenario 2.1", 2001, Lambdacolor print, 92 x 150 cm
Scenario 2 In 1928 American investors support a proposal by Mies van der Rohe. By 1932, five of the planned eleven buildings are finished. During the war, large parts of the square are destroyed by air raids. After 1945, the East German Senate decides to restore two relatively undamaged Mies van der Rohe buildings. In the 60s these are integrated into the restructuring of the square. After the reunification, Daniel Libeskind wins first prize just ahead of Kollhoff. Between 1995 and 1999, the first building is realized - the Euroforum - which resembles Mies van der Rohe's famous 1921 proposal for Friedrichstrasse. The buildings function to provide offices for European organisations next to the town hall meets with some resistance from the public. Up to the present, only the Berliner Touristik GmbH have moved in. Further realization of the plan is uncertain, as the need for office space has slackened and there is incresing demand for pre WW1 style (Gründerzeit) architecture.


Posted by Fabrizio Gallanti at 06:23