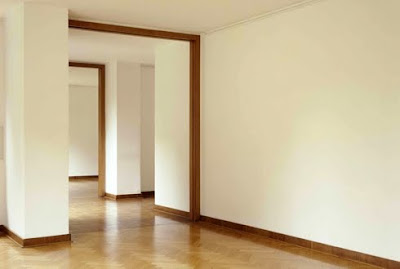 The site of this exhibition was one of a pair of Modernist villas built by Mies van der Rohe in 1928–30 that had been converted into gallery space. When artist Bethan Huws first saw the house she found it so beautiful that she decided to leave it empty for her exhibition, treating it as both a readymade and an artwork in its own right that needed nothing added to it. To accompany her show, she did, however, prepare a text, which consisted of a selection of words — adverbs, pronouns, prepositions, declinations of the verb “to be,” etc. — excerpted from a conversation with her partner, Thierry Hauch, but that on their own meant absolutely nothing. Although the only permanent “void” created by Yves Klein is just next door in the Haus Lange (the second Mies van der Rohe villa), Huws claims she was not particularly inspired by Klein’s intervention, since she feels distant from his philosophy and “mystifications.” She has also said that the Haus Esters exhibition came at the end of an intense period of work that had left her creatively unsure and empty and that following the show she produced nothing for five years.
Posted by Fabrizio Gallanti at 12:14