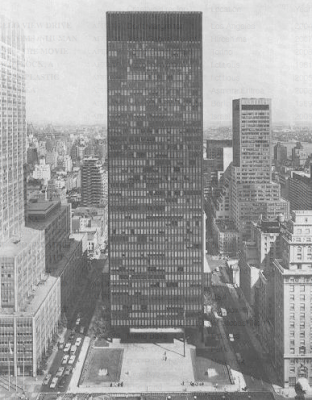 François Boué (New York) has been producing short 8mm films on modern architecture for several years, often edited in-camera. New Ark (2001) is made up of a series of short pans and static shots that show the architecture of Mies van der Rohe's Seagram Building in New York and Colonnades Housing Complex in Newark. The compositions are reminiscent of Rodchenko, but they also evoke survey photography, due to the grainy film and the warts-and-all depiction of the architecture, shown slightly worn and clearly inhabited.

Posted by Fabrizio Gallanti at 12:44