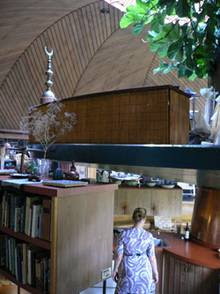 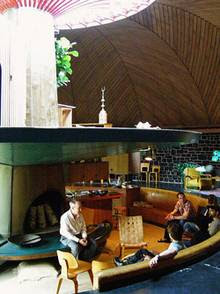 American artist Stephen Prina is highly regarded for his hybrid, intricate practice, which plays with the role of the artwork within cultural and institutional networks.

Prina’s new film, The Way He Always Wanted It II (USA, 2008, 35mm, approx 30 min) investigates the architect Bruce Goff’s own multi-faceted approach to music, painting and architecture. Shot in Goff’s Ford House, the film includes a score by Prina, performed in the house and written using excerpts from Goff’s own compositions and correspondence.

THE WAY HE ALWAYS WANTED IT first appeared in Stephen Prina's work as the title of an unrealized sound installation, scored in 1979 for a re-spatialization of Arnold Schönberg's "Sechs kleine Klavierstücke" ("SixLittle Piano Pieces"), 1911, for one thousand eighty-one loudspeakers.
Its next appearance was as a component of Haberdashery, 2002. THE WAY HE ALWAYS WANTED IT II, 2008, is a 35mm film, shot at Ford House, a Bruce Goff-designed home in Aurora, Illinois, with a musical score derived from fragments of music written by Goff before he abandoned music composition at the age of thirty, with the defense that there were fewer great modern architects than composers so that he would have a better chance at leaving his mark as an architect. A place is held for this film in the context of the exhibition by a poster announcing two screenings of it: one at Anthology Film Archives, Monday, March 30, 2009, and one at Harvard Film Archive, May 3, 2009.

THE WAY HE ALWAYS WANTED IT III, 2009--the first video installation Prina will have made since 1976--uses an outtake from the aforementioned film to give body to this work.

THE WAY HE ALWAYS WANTED IT IV, 2009, is an edition of twenty photographs, culled from yet another outtake of the film project, frame enlargements of which have been selected and assembled to encourage close readings of small details.

THE WAY HE ALWAYS WANTED IT V, 2005-09, is a series of watercolors with graphite, made en plein air in Los Angeles, using a retrospective of slogans and linguistic motives from Prina's work--including "It's in our own best interests.", "It was the best he could do at the moment.", "WE REPRESENT OURSELVES TO THE WORLD.", AND "SJP"--as a scaffold of language, functioning
as a pre-existing scheme to which the artist must respond. Blind Painting, No. 3, Fifteen-foot Ceiling or Lower (THE WAY HE ALWAYS WANTED IT/Friedrich Petzel Gallery, New York), 2009, completes the chiasmus, with surplus, upon which this exhibition is built.
Posted by Fabrizio Gallanti at 11:24