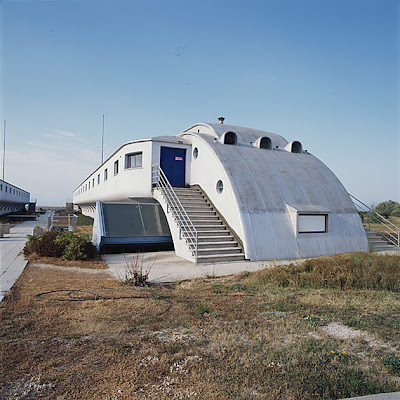 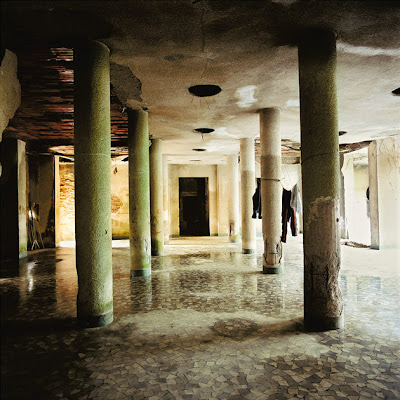 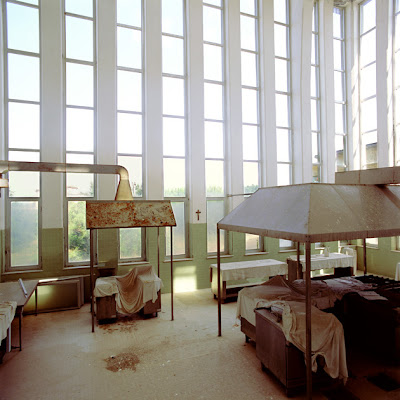 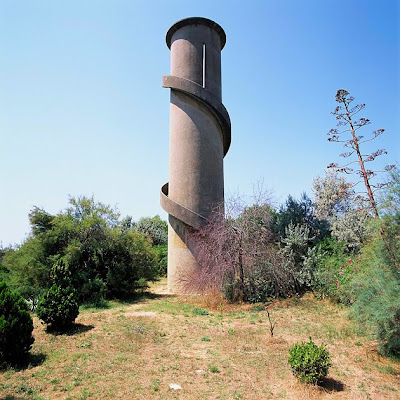 In 2005, when Dan Dubowitz and I set out to look for the abandoned modernist architecture of fascist Italy it was the apparent contradictions between Modernism - the architecture of 'progress'- and Fascism - the 'counter- revolution' - that made the subject of interest to me. Today the international importance of Italian architecture of the Fascist regime (1922-45) is hardly acknowledged. Anti-fascism was written into the 1948 constitution of post-war Italy and remains the founding principle; consequently fascist architecture has been dismissed by a society unable to attribute cultural value to it. The regime's building programmes were prodigious and internationally acclaimed, yet now with a few well known exceptions the buildings are generally forgotten; their architects often condemned to obscurity. Key works such as the Stazione Termini railway station in Rome have been altered beyond recognition. Others have become derelict, including a disproportionately large number of colonie di infanzia 'holiday' camps constructed for the fascist youth organisations. There are a number of reasons why this latter group of buildings has survived. The overarchingly fascist programmes for which they were designed often made their adaptation for new uses impractical as well as unconscionable, whilst the remoteness of the locations in which they were built has made them easier to ignore than to demolish.

Modernism had a particular appeal to Benito Mussolini, il Duce. He sought to affirm the identity of the new Italy in contrast to the backward looking and liberal pre-fascist past. Every revolution, he declared creates new forms, new myths, and new rites. Under Mussolini there were official fascist styles of greeting (the Roman salute), walking (the passo romano), eating (sparingly), writing, speaking and thinking. Fascist style emphasised conciseness and vigour, in contrast to lax and lazy forms of democratic and liberal expression.

The futurists who enthusiastically supported Mussolini's regime exalted the technological achievements of the new machine age such as the white telephones beloved of Fascist cinema, the Littorine railway trains of the Ferrovie dello Stato, and the Savoia-Marchetti seaplanes. Futurist architects such as Angiolo Mazzoni and Clemente Busiri-Vici designed buildings that were similarly stripped back and streamlined. Their passion for symbols of the machine age was driven by a fanatical belief in the transformative power of an aesthetic. They designed buildings that looked like machines in the belief that the fascist utopia could be brought into being by such architectural manifestations.

The Fascist regime was not however unequivocal in its rejection of the past. Historicism retained cultural currency as fascist ideologues co-opted history to support their new imperial ambition. In Mazzoni's architecture, machine metaphors were therefore juxtaposed with allusions to Roman antiquity. The ubiquitous fascio, the axe bound in a bundle of rods that was the ancient symbol of the rule of law, became a symbolic architectural element that might appear in the form of a stair tower, a window, a door handle or a column.

Meanwhile a younger generation of architects, the Rationalists, reacted to what they saw as an emphasis on stylistic alliteration. International in outlook, the Milanese Gruppo Sette and their counterparts in Turin propounded an ideology would transform society through design and bring about il Duce's new Italy. Playing down the notion of a break with history the rationalists evoked the spirit of the past to assert the legitimacy of the new in a manner and in a language that bore a striking resemblance to the political language of the Fascist regime. The rationalists could claim Le Corbusier as a second source for this approach. A great epoch has begun. There exists a new spirit Le Corbusier proclaimed. Rome's business was to conquer the world and to govern it....If it is brutal, so much the worse, or so much the better. These words were published in Vers Une Architecture in 1923, the year that Mussolini came to power. Whilst Le Corbusier may not have been unquestioning in his fascist sympathies, the paternal overtones, the latent fear and the utopian delusions expressed by the leader of architectural modernism found full expression under Fascism.

Mussolini announced his support for Rationalist architecture in 1934, and after intense lobbying Le Corbusier was invited to Italy in the same year. By some fateful miscalculation his visit coincided with Mussolini's first meeting with Adolf Hitler and the great architect left without having met il Duce. Mussolini later admitted that he was unmoved by art or architecture, and could not understand why Hitler insisted on visiting the Uffizi Gallery in Florence on his second visit to Italy in 1938.

The result of il Duce's ambivalence towards the arts was that fascist architecture was remarkably pluralistic, juxtaposing the essentially incompatible positions of Modernism and traditionalists. Architectural debate in Italy became a battle ground over which protagonists from both camps, led by Ugo Ojetti on the one hand and Marcello Piacentini on the other fought to demonstrate their fascistissime credentials. However the arguments were never about political or social intentions. There was no questioning of the rectitude of the regime's social programmes; vitriol was expended on debate about what form best represented Fascism, and never strayed into what constituted Fascism itself.

The regime created the idea of the new Italian, l'uomo nuovo del tempo di Mussolini. The elite soldier of the new Roman Empire was to be ardent, determined and indomitable. In order to transform Italians in this way, the Fascists embarked on an immense project for a new social state not intended for welfare but for war. Engineering, science and medicine provided models for a massive programme for bonifica umana or human reclamation, which paralleled other bonifica schemes for national improvement of which the best known was bonifica agricola, the programme for the reclamation of agricultural land. The term bonifica implied contempt for the unreformed, and the Fascists used similarly disparaging language to describe the lives of millions of Italians as to describe the environmental conditions of the malaria ridden swamps of the Pontine Marshes. Under the auspices of bonifica umana, the Fascists reorganised and extended existing provisions for education, health and social care according to industrial principles and on an industrial scale. The regime brought medicine, hygiene, fitness and dentistry to the masses where in other countries good health remained the preserve of the wealthy.

Paramilitary youth organisations, the Opera Nazionale Balilla (ONB) and (after 1937) the Gioventù Italiana del Littorio (GIL) were established as a central pier of this programme to manipulate Italian children into active support for Fascism. Both organisations were important architectural patrons, erecting colonie di infanzia on the Adriatic and Tyrrhenian coasts billed as health spas and holiday camps, the colonie brought together modern architecture, fresh air and discipline in a way designed to fascistise the body and soul of Italian youth. They were far removed from the stagnant towns of Italy's past and away from traditional structures of family and community. Even in the context of massive public works programmes, the building of colonie offered unprecedented opportunities for ambitious architects. The colonia became a distinctive fascist building type that evolved under the directives of the ONB and the GIL. The marching, synchronised exercise and gymnastics, flag raising, saluting and swearing of allegiance to the regime that comprised the dramatic daily programme of the colonie inspired architectural features including towers, ramps and elevated platforms for the parading troupes of Balilla. In contrast to this spectacle, official regulations declared that luxuries were anti-educational and anti-social and accordingly the colonie provided only the most basic of accommodation. Dormitories were intimidating, open plan and stark; each might accommodate several hundred children. Italian parents routinely admonished recalcitrant children with the threat ti mando in colonia! (_Behave, or I'll send you to the colonia!_). For a generation of Italians the experience of Fascism was a formative one, and many are still affected by it today.

As Fascism passes from living memory, the Fascist regime may appear to many young Italians as an unexceptional part of their history. Italy's current generation of right-wing politicians are reviewing the architectural achievements of the Fascist era. This represents a major setback for those who would extricate their country's modern architectural heritage from the opprobrium of its historical political association. Looking at Fascist architecture from my perspective outside Italy, the abandoned colonie appear to me to be a metaphor for the legacy of the regime in the national collective consciousness; a legacy that is complex, difficult and painful to contemplate, but which is too important to be forgotten. The future of the colonie hangs on the resolution of this dilemma. Fascism has not been consigned to history. It cannot be exorcised either by the obliteration of its monuments or by the packaging of them as heritage.