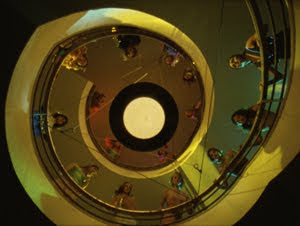 The starting point of Wintergarden, like that of In the Palace, was a particular fascination with a piece of sculpture --in this case, an unrealized 30 foot high statue of Persephone, Greek goddess of the underworld. This statue was meant to stand tall over the De La Warr Pavilion, a modernist masterpiece on England’s south coast, romantic embodiment of ‘socialism by the sea,’ and the primary location for this film. It was the Pavilion’s architect, Eric Mendelsohn, who, in the 1930’s, proposed, and then abandoned, plans for Persephone to grace his 20th century ‘wintergarden’, although she seemed a peculiar choice to embody the upbeat, health conscious, quasi-sanitorium character of his building. Perhaps Mendelsohn, a Jew exiled from Weimar Berlin, chose this split, dark goddess because she mirrored his own state of exile. Wintergarden seeks to reanimate the spirit of this lost project, using the structure of the Pavilion as armature, and for flesh: a young woman’s climb, downwards, into a strange world of song. By alternating between dark and light, between upward lifting and downward spiraling, Wintergarden awakens an atmosphere of tension between opposites, and concentrates that emotion within the psychology of an individual, contemporary woman. The film moves beyond historical reference to the period between the world wars by pointing towards, more generally, captive emotions that shadow heroism.