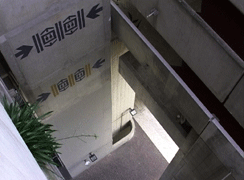 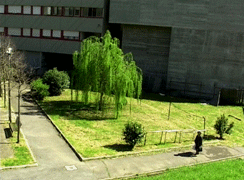 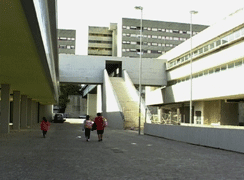 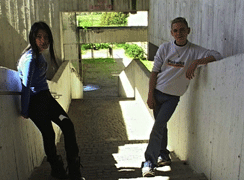 
Corviale is a 1 km long housing complex in the periphery of Rome. The building was commissioned in 1972 by the IACP (Institute for social housing) to a group of architects directed by Mario Fiorentino to solve the acute lack of housing for working class families. Furthermore like a barrier it should prevent the spreading of the city into nature. Finished in 1983, it is home to 9.500 tenants. The building was based on the idea of social housing according to Le Corbusier, to provide all needed infrastructures of a city within the complex itself, and to encourage social contacts between the occupants. For internal and political reasons many of these originally planned structures were never realized or are, almost 20 years after the first occupants moved in, still unfinished.
The occupants discuss missing infrastructures and prejudices from outside which characterize Corviale as a ghetto with high rates of unemployment, criminality and drug abuse.

The work addresses the failure of the utopian modernist architecture in social and everyday life.
Interviews with the occupants are juxtaposed with music-video like sequences featuring Roman Hip Hop which addresses social issues that are of concern in the film.

Posted by Fabrizio Gallanti at 11:56