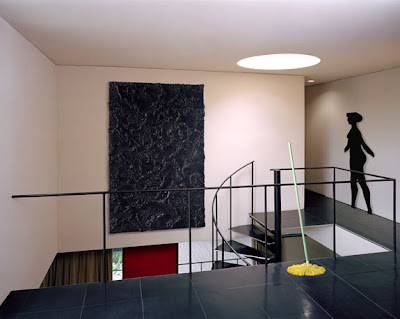 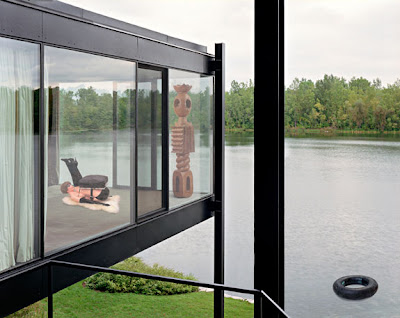 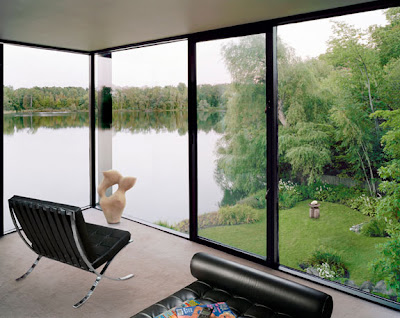 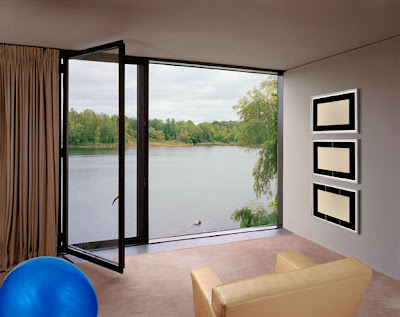 There's no place like this home: John Massey turns photo-chicanery into art form by Robert Fulford (The National Post, 12 October 2004)

John Massey, a much exhibited and much admired Toronto artist, began his education in modernist culture when he was an eight-year-old. That was in 1958, when his family moved into the refined and elegant environment of an Ottawa house designed precisely in the manner of Ludwig Mies van der Rohe, the German-American prince of modernism. It was a new home, built in Rockcliffe Park on the shore of tiny McKay Lake by John's architect father, Hart Massey, the son of Vincent, who was then also in Ottawa serving as the first Canadian-born Governor General.

That same house makes a spectacular appearance this week in Phantoms of the Modern, John Massey's exhibition of manipulated digital photographs, which opened on Saturday at the new location of the Bailey Fine Arts gallery on College Street in Toronto. Massey's boyhood home provides the background for a series of large-scale prints that look at a glance like merely handsome photographs but turn out to be something far more interesting, a serious artist's 21st-century re-imagining of 20th-century modernism at its peak.

Unlike many imitators, Hart Massey knew how to reproduce the exquisitely proportioned spaces that were crucial to Miesian architecture. The Ottawa building in some ways resembles the Farnsworth House at Plano, Ill., which was completed eight years earlier and may be the closest Mies came to a perfect building. Unfortunately, its cost and its style displeased the client, Dr. Edith Farnsworth, who ended up hating her house, Mies, and for that matter modern architecture. Since Hart Massey was his own client no such conflict arose. When he died in 1996 that structure had become part of Ottawa history, the city's introduction to Bauhaus architecture.

John Massey grew up to be a sculptor, a filmmaker, a creator of installation art and one of many artists who have made photography central to their work. He's had solo exhibitions in Cologne, Paris, Antwerp, Pittsburgh and Long Island City, as well as Ottawa, Montreal and Toronto.

When the manipulation of photographs by computer became possible, it horrified people who saw it as a threat to the integrity of the picture. In 1982 the cover of National Geographic showed two pyramids digitally squeezed together to intensify the effect on the reader. That launched a thousand arguments over ethics, and to this day the Web site of the National Press Photographer's Association calls the National Geographic cover "a visual lie" that damaged a famous magazine's credibility.

Photographs don't lie, people used to say -- even though history contains many examples of photographic mendacity, the most famous being the Stalinist habit of excising from official pictures those colleagues who in losing Stalin's affection had also lost their lives. But 1980s computerization seemed far worse because it produced much more convincing images. In the privacy of their studios, photographers could create scenes that never existed while making them appear as convincing as "real" pictures.

Massey, far from being threatened by this new technique, was among those who enthusiastically embraced its possibilities as an artists' tool. He had already made many collage photo pieces laboriously constructed with the equivalent of paste and scissors. Now he saw a new era in photo art opening.

It helped confirm his long-held view that any kind of photograph amounts to an artificial construction rather than a simple depiction of reality. The photographer selects subject and viewpoint and crops the picture, then perhaps an editor selects the picture and crops it again. That's unquestionably manipulation, though it's the old-fashioned kind, accepted for generations by nearly everyone.

Massey was happy to use digital manipulation in many of his most ambitious works. Eventually he found a way to apply it to a subject that intensely interested him, modernist culture. He returned briefly to the place where he first encountered that culture and asked the current owners of his family's old home, Thomas and Susan d'Aquino, to let him occupy it alone for five days in the summer of 2003. He moved most of the furniture out of the way and took many, many digital photos.

His project was to re-imagine modernist design. Mies made buildings that were (or tried to be) as objective as machinery; Massey's work, on the other hand, contains a charge of personal feeling. Modernist architecture appears sexless; Massey's art usually contains subtle elements of sensuality.

Back in his studio in Toronto, he brought all of these forces together. He began digitally inserting into the photographs various works of roughly contemporaneous art, about three or four insertions a picture, all of which contrast with the perfection of the building. Into one picture he inserted sculptures by Giacometti and Maillol. Into another he placed a Michael Snow Walking Woman silhouette and an abstract painting by Ron Martin. To a third he added Brancusi's The Kiss and Stations of the Cross by Barnett Newman.

In every case he created absolutely convincing interiors, each of them a purely fictional room that has never existed except in a computer and now within a picture frame. So far as I know, it's impossible for the naked eye to see any difference between these pieces and "real" photos. Massey makes every insertion seem a natural part of the room.

Emerging on the gallery walls, the prints create little narratives, injecting a fresh sense of life into the modernist surroundings. And in each of them sexuality plays a role, "the slightly libidinous content," as Massey calls it, that he projected onto the house of his father. Sometimes it's clear, as in Snow's Walking Woman, and sometimes it's relatively hidden. He digitally pastes on the wall of one room a minimalist Donald Judd sculpture, which is not exactly sexy; but through the window we see a woman swimming in McKay Lake. On inquiry we learn this is no less than Hedy Lamarr, in a still photo digitally lifted from the 1933 Czech film Ecstasy, which depicted the first convincing orgasm in the history of cinema and earned her a Hollywood career.

Hart Massey, in building his Rockcliffe home, created an emblem in steel and glass of ideal modernist purity as Mies articulated it. Hart's son John, working in the relatively ephemeral and highly impure medium of digital photography, has created his own subtle, ambiguous monument to the building his father made and the era it expertly embodied.

Posted by Fabrizio Gallanti at 12:07