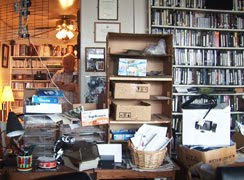 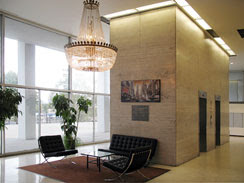 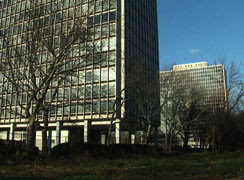 The film portrays Mies van der Rohe's Colonnade and Pavilion apartment buildings in Newark, New Jersey through conversations with its inhabitants. Built between 1954 and 1960, the Colonnade and Pavilion Apartments—three glass-and-steel towers—and the Christopher Columbus Homes, a public housing project in between them, marked the beginning of urban renewal in Newark. Interviews with tenants about their experiences of living in the classic modernist buildings are juxtaposed with shots of their apartments and views from windows.

An interesting thing about Heidrun Holzfeind's work [...] is the way it leads us to ask a different sort of question. That is, it manifests a notion of architecture not purely as image, not purely as volume, but as social space, as a molding and molded shell homologous to other social structures reactive with its users, its residents. The Newark buildings present a less iconic case, their symbolic value—their lateness, obscurity, and impurities—shaded in ambiguities. Holzfeind’s work eludes the category of artifact because the unquantified social relations within and without replace the archeologist's brush and magnifying glass. It is not buried and unearthed but always inhabited, always operative. It is not concerned with the question of modernism per se but rather with the inter-secting subjectivities produced in spite and because of modernism's and modernization's aggregations. (Niko Vicario)
quotes from interviews

It’s an ideal place to live! I have traveled quite a bit in my life. I have been to 36 states in this country and I haven’t seen any place else I wanna live... When we moved here it was maybe 85% Caucasian. A lot of professional people. Lawyers and doctors and dentists and teachers. So we just blended right in. (Mary Garrett)

Each floor has fourteen apartments. The way these buildings work is that your neighborhood is your floor. These are the people that you know. And then you may have other friends in the building based on common interests – you know like jazz, or politics, or what have you… but much less so. (Glen Scutt)

We tend to be very insularly. Once we get home we stay home. And I think that is what the original plan of the architect was – that this becomes a type of utopia because we have a grocery store downstairs, we had a cleaners, we have a laundry, we had a barber shop, we have an art gallery. So when we have snow days we’re totally fine. (Talibah Sun)

I moved down to the 13th floor on the New York side and that is a glamour view! That, today, is still one of the great reasons to live in the Mies van der Rohe building – because it’s glass windows from your knees up to the ceiling. There is nothing in front of you, pretty much, except light and air. And I never bothered to move because I would miss the view. It’s a Hollywood movie set view, there is no question about it. (Bill Dane)

When you go down south, you hear crickets. When you come here, you hear [Route] 280. About two, three months ago they were chasing a car they thought was stolen. It was a shoot-out on 280. So I woke up with helicopters all in my windows. That’s interesting! Who needs HBO? You live here in Newark, you live in the Pavilion Apartments. Look out your window! Go in the lobby! (Stefanie Tucker)

This is a huge building, 562 apartments. Must be several thousand people here. It’s a small town. This building like any has its dramas, things can happen anywhere. It’s a community and I am impressed that the building functions so well. (Mike Wright)

In large apartment buildings in some ways people feel more comfortable by not being too close to their neighbors. It’s something that could be usefully addressed. You almost need a common enemy. When we had that rent strike, the common enemy was, we were – some people were afraid of being killed. That’s a good motivator. (Glen Scutt)
Posted by Fabrizio Gallanti at 16:02