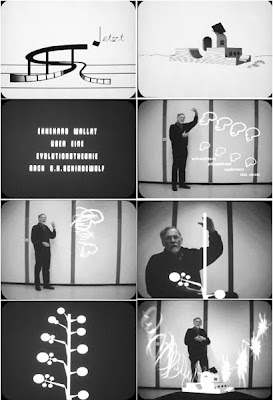 In Manuel Graf's "about the time flowing from future" the artist's former teacher reports "about the time flowing from future".
The title as the beginning manifests itself through an animation of Frank Loyd Wrights "Falling Waters". It is followed by a graphic of the Dusseldorf Theodor-Heuss-Bridge, from which (being the present location) a piece of "Now" breaks off and falls into the roof of an animated version of Ledoux' lock-keeper-house. From there Manuel Graf leads us to the lecture "Ekkehard Wallat about a theory of Evolution after O.H. Schindewolf" (a contemporary of Darwin). Mr. Wallat talks about the ageing process on the basis of the childhood and adult-cranium of Australopithecus, Pithecanthropus, Neanderthaler up to Homo Sapiens. The theory states that the ageing process from the respective childhood cranium of the various species to the adult cranium progresses linear, from fine and small to coarse and marked. From Australopithecus to modern man the opposite is the case. Here the course of development is retrogressive. If one compares an adult cranium of Australopithecus with an adult cranium of Homo Sapiens, it's like comparing a childhood cranium with an adult cranium. A "re-juvenation" took place. While Mr. Wallat presents this theory, animations of the respective skulls and their direction of development appear on the screen. In the second part of the work Mr. Wallat explains the same theory on the basis of the growing of plants. Meanwhile the addressed processes materialise themselves out of his hands in a poetic and magical way. Mr Wallat leaves us with recapitulating that there are two directions from which time flows "getting old" - "getting young". These are visualized through abstract spiral and star-shaped patterns, which symbolize the directions of the flow of time. In the end the piece of "Now" extols itself out of the roof of the lock-keeper-house and Coldplay sing "I'm going back to the start".
Posted by Fabrizio Gallanti at 15:02