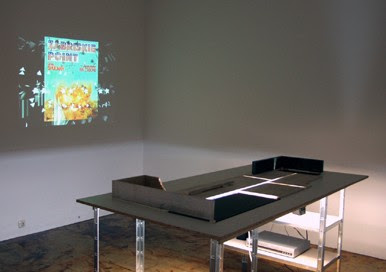 For the exhibition in BÜRO DC, Monica Stricker built a sculpture using the Barcelona Pavillion as a point of departure. She uses the materials chosen by Mies van der Rohe, though only the clamps, the outer walls of the original are shown. Her primary concern here was not to create an exact duplicate, but rather to create a new form, a sculpture, that illuminates and allows us to recall the pavilion as an icon of modernity.

The Mies van der Rohe Pavillon was built for the world fair in Barcelona in 1929 and stood only a short period of time before it was demolished. "Its appearance was not determined by any kind of function. [...] the space flowed between separated verticals and horizontal levels. But the flow of space was braced by parenthetical walls at each end of the podium. Between these walls, the building 'was' a slow dance on the podium." (A. Draxler, 1960) We have photographs and discussions to thank for our ability to remember the Barcelona Pavilion, as well as a reproduction built in 1986. Of course it also maintains unique its power and meaning as one of Mies van der Rohe's key works.

Monika Stricker's work calls this memory once again to conscience - stepping inside the structure is only possible in our imaginations. The exploration of outside and inside remains closed to us, the Pavilion seems to be a stage onto which the viewer can project himself. The work stands as a representative for the dissolution architecture as a closed system, it seems to reference a time of profound change. Monika Stricker lets us look at everything, she lets us think back but most of all stand ahead: to a unique poetic form, charged with still-fascinating material and light.
Posted by Fabrizio Gallanti at 14:58